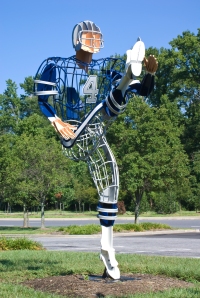 It’s happening again—the game of musical chairs among football coaches. I live on the periphery of this world (translated: don’t really give a rip but hear the constant discussion due to others’ interest). Have you been listening? Do you hear a strong similarity between this dialogue and the political discussions leading up to the November election? Will changing or retaining the leadership really make or break a team? What role do the players fill?

But the ongoing chatter seeped in, and my mind started down one of its rabbit trails. Why is this so important? Or is it? Does the coach make that much of a difference? Does the political party in power really matter?

I do know about coaching: have done it myself at the high school level, am married to a coach at college and high school levels, have children who coach and have been coached. Over the years, I have found that coaches can be divided into two general camps which I call SYSTEM and TALENT POOL.

SYSTEM coaches believe in a game plan, a system, which will bring success. Players have very specific roles to play and their responsibility is to learn and fulfill those roles. Player buy-in is essential for them for both individual and team achievement. Participants who can and will adopt the game plan are often those who prefer the stability of its defined systems and roles which bring built-in goals and patterns.

TALENT POOL coaches adapt their systems according to the strengths and weaknesses of the players they have each year. Roles are adapted as the game plan changes. This happens as team personnel develop their skills and as players come and go. The coach’s strategy is to best utilize current skill levels and game face to meet the competition’s challenges. Roles are more fluid and shifts are made with skill development and as new talent emerges or joins the team.

What intrigues me is player response. How do individuals fit into a coach’s way of doing things? Are different personality types drawn to either the SYSTEM or TALENT POOL camp? What would a rugged individualist choose? A people pleaser? How about a there-is-no-I-in-TEAM player or an out-of-the-box thinker? Would their reaction be different if they came from an autocratic background or grew up with few constraints?

These are the ideas I want to play with in the next few blogs. As players in the game of life, how do we get along with our coaches and their game plans? I invite your responses, and if you want to talk football, I’m willing and even promise to care—a little.