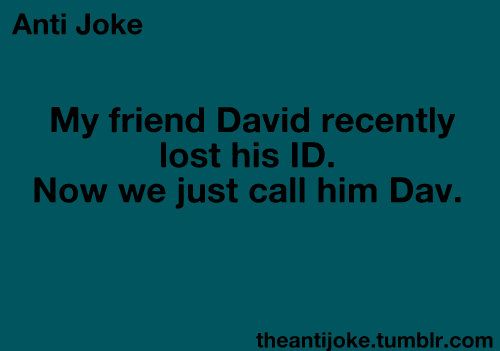 A group of chess enthusiasts checked into a hotel and were standing in the lobby discussing their recent tournament victories. After about an hour, the manager came out of the office and asked them to disperse. “But why?” they asked, as they moved off. “Because,” he said, “I can’t stand chess nuts boasting in an open foyer.”

A woman has twins, and gives them up for adoption. One of them goes to a family in Egypt and is named “Amal.” The other goes to a family in Spain; they name him “Juan.” Years later, Juan sends a picture of himself to his birth mother. Upon receiving the picture, she tells her husband that she wishes she also had a picture of Amal. Her husband responds, “They’re twins! If you’ve seen Juan, you’ve seen Amal.”